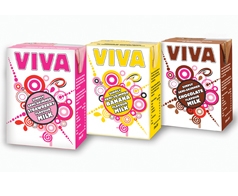 Pritchitts popular Viva Flavoured Milk range, already a healthy choice for many schools, is now even better for pupils with its added vitamin D to help schools and parents combat rising levels of vitamin D deficiency.

Vitamin D is usually produced from the sun’s ultra violet light (UVB) by our skin. However the combination of children being less active and concerns over sun exposure* has led to children not developing the levels of vitamin D needed to prevent bone diseases such as rickets.

Simon Muschamp, Head of Marketing at Pritchitts, said: “Vitamin D is vital to the healthy development of children, in recent years we have been aware that there have been growing reports of vitamin D deficiency in children due to decreasing levels of sun exposure. Viva Flavoured Milk has proven itself as such an effective way of giving children the nutrients they need that we took the decision to add Vitamin D to help schools and parents combat this worrying trend in children’s health.”

Indeed a study in Southampton showed that 20% of children had symptoms of rickets^, and in the last decade the number of children younger than 10 admitted to hospital with the disease increased by a shocking 140%.

Simon adds, “Children may be choosing computer games instead of playing outside but we know they love Viva Flavoured Milk. By adding Vitamin D it reduces the headache both schools and parents are facing with how to introduce more Vitamin D to children’s diets.”