The Red Barn Proves the Cream of the Crop 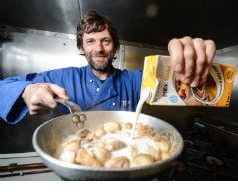 Proving that you don’t need a city location to achieve a roaring trade, The Red Barn Pub & Restaurant in the picturesque coastal village of Woolacombe, Devon has carved out a reputation for good food and real ales that has resulted in the pub averaging 900 covers a day.

“We incorporate local produce wherever possible and focus on doing simple food really well – it’s about supporting the community and getting quality on the menu” says Head Chef, Steve McCubbin, who during the last decade along with his dedicated team of 16, has made the Red Barn a go-to with locals and tourists.

“We’re predominantly a family focused pub, but the area is known for its beach (Woolacombe boasts three miles of beach) and so is a popular destination with surfers and walkers. There’s a lot of tourists in the summer months so we get a real mix of people all looking for something different – from afternoon tea to hearty dinners after a day on the water. There’s also the challenge of keeping the locals happy all year round and making sure there’s something new for them to try, we keep the menu fresh with seasonal specials.”

Along with keeping menus fresh, Steve’s biggest challenge is wastage. “The weather naturally will have an impact on the number of people we get through the door and what they’ll want to eat – it does mean the dishes you’re preparing will vary heavily day to day and that can mean waste.”

With Millac Gold, Steve has found a way to at least minimise his dairy wastage, Pritchitts premium cream alternative is so versatile it lends itself to a host of Steve’s best selling sweet and savoury dishes from fish pies and savoury crumbles to steaks, classic Carbonara, quiches and sticky toffee pudding.

“I’ve been using Millac Gold for ten years after it was recommended to me by another chef, in all that time it has never let me down and the customers can’t tell the difference in the flavour. The biggest benefit for me is the fact it’s ambient and doesn’t go off as fast as fresh cream when opened.” says Steve. “We use a lot of cream so the waste on that can be significant if we used fresh – that’s where Millac Gold comes in, I just use it when I need it.” With his passion for food stemming from cooking with his grandparents as a child, Steve’s enthusiasm for homemade food hasn’t wavered despite the pressure of 100 covers an hour.

“Wherever possible we prepare everything from scratch ourselves, it makes the difference as customers don’t mind paying when they know they’re getting quality food – it’s what’s got us through the recession. It’s about putting your stamp on something as simple as Fish & Chips we use local cod, with homemade beer batter and tartare sauce.”
One of the Red Barn’s most popular dishes is its Butternut Crumble, receiving rave reviews on Trip Advisor, Steve adds, “I developed the recipe myself years ago to give vegetarians something different, it’s now one of our signature dishes – the butternut has a great meaty texture which makes for a ‘satisfaction dish’ whether you’re vegetarian or not. A lot of pubs in the area now do their own version so there’s a real trend for savoury crumbles.”

“By using Millac Gold instead of fresh cream in dishes such as the crumble it helps to extend their chiller life. I make my Leek & Butternut Crumble in batches and keep them in the fridge ready for service, I can leave them with confidence for a couple of days knowing they’ll be fine – with fresh cream you know you have a very small window to sell them or that’s it .”

Fish & Chips and Crumbles aside, Steve has also established a reputation for nostalgic comfort food puddings, he adds: “Our Sticky Toffee Pudding is a signature dish on the menu, the toffee sauce is made using caramelized sugar, coffee, tea, vanilla and Millac Gold to give it some creaminess and the customers love it! I make the sauce in advance and even at 300 degrees Millac Gold won’t split.  Being able to make sweet or savoury sauces like that in bulk is great as it means I can focus on the rest of service. You can also make enough for a week for the front-of-house staff to use and it won’t go off the way fresh cream would”.

With a reputation to maintain, consistency in the Red Barn’s offering is essential, another advantage Steve has found when using Millac Gold.
“The issue I have with fresh cream is the flavour can vary from batch to batch. With Millac Gold you don’t have to worry, it means that whoever is on service or whatever area of the kitchen Millac Gold is being used the result will be the same again and again.”

As Steve surveys the plethora of customers enjoying the best Woolacombe has to offer, what tips would he offer pub chefs in menu success. “Take pride in your food, don't be lazy be a chef and cook it! You’ll get a much better result and the customers will love it. If every chef did that we’d have some amazing food coming out there”.

View Steve's recipes by clicking below: