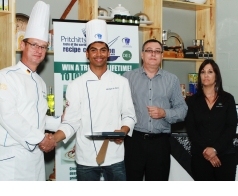 Bertram du Plooy, Owner and Head Pâtisser of Spoon To Spoon Cake Boutique, snapped up the title as winner of the 2012 Pritchitts Taste of the World Competition. Along with being crowned winner, he also received a trip for two to London and Ireland, as well as R20 000 to spend on his kitchen unit.

In the months leading up to the final cook-off, professional chefs and culinary students were invited to submit their recipes using any one or more of the Pritchitts products distributed within South Africa by Del Trade: Millac Gold, Creative Base, Roselle Supreme, Chef’s Taste, Millac Dairy Whipping Cream and Sure Whip.

Each chef was given three hours to complete their signature menu consisting of a starter, main and dessert: all courses had to include a Pritchitts cream and their entry recipe had to be incorporated as part of their final presentation.

Simplicity is what inspires him; Bertram aims to keep his dishes simple by incorporating each ingredient in such a way that it stands out. A true believer in Millac Gold in his own kitchen, Bertram explains that it is a product that has never let him down, and his quiet yet unwavering confidence during the competition was largely due to the fact that the product’s versatility has never failed to impress.

“It’s important to remain focused,” he says. “I try to get into this zone which allows me to focus on what I do and nothing else.”

Being a pastry chef by trade, Bertram’s main inspiration for entering the competition was to test his hot kitchen skills, as it had been years since he last prepared a full course menu. With good preparation before-hand, however, he proved to himself and the judges that he still has what it takes. “I’ve still got it!” he says with a laugh.

And if ever there was an example of hard work paid off, this is it; Bertram plans to take his overseas trip within the next six months, accompanied by his father, who will be leaving South African shores for the first time ever. He also plans to use the prize money to buy extra refrigeration – something that will come in very handy for the dozens of wedding cakes he has been commissioned to do in the coming months.

Each finalist emphasised the worth of having entered the competition, saying the judges’ feedback in particular was invaluable, and that the experience was a true highlight in their culinary careers. Each judge boasts a wealth of international experience, and this greatly contributed to the quality of this high-calibre event.

“One of the highlights for me was that the people involved in the competition, from the organisers to the judges to the competitors were all so passionate. Peter Hallmans from Pritchitts particularly made an impression on me, because he was so passionate and involved and enthusiastic. This set the tone for a great ambience and a positive outcome. I was humbled by his attitude,” said Clinton Bonhomme. “The organisation was great, the mood was relaxed, and I enjoyed that the competitors all got on so well together.”

“I thought the competition was a well-planned and organised event. There was a fantastic atmosphere, and the contenders were all great to work with,” said first runner-up Chef Chris Lategan, whose menu consisted of Sweet Garden Pea and Ham Ragout, Roasted Caramelized Garlic Cloves with Fava Bean Puree as a starter, Double Cooked Honey BBQ Roasted Pork Belly Slice infused with All Spice, Truffle Cauliflower, and Parsnip and Sweet Potato Puree, Apple and Cinnamon Compote with a Guinness Reduction as a main, and Pistachio and Chocolate Frangipane Squares, Bitter Sweet Chocolate Sauce, Ground Ginger and Banana Powder, Mocha Flavoured Mascarpone and Coffee Tequila Nibs as dessert. “I’ve already encouraged some of my fellow workers to enter next year. It’s a whole new world working with Pritchitts products – I can’t wait try some new recipes!”

Jonathan Gargan, who created a starter of Mushroom Parfait, Fricassee of Exotic Mushrooms, Mushroom Croquet and Toasted Pine Nuts, a main dish of Mi Cuit of Crayfish, Crayfish Bisque Mousse, Green Vegetable Salad, Crustacean and Lemon Aioli and Vanilla Crustacean Oil, and a dessert of Lemon Mousse and Marzipan Gelee, Lemon Ash Meringue, Lemon Curd and White Chocolate Soil, said that having not participated in competitions for the past eight years, it was great to experience the adrenalin of a competition once again. “My highlights were being able to produce dishes which demonstrated my approach towards cooking. Utilizing modern products provided by Pritchitts and combining them with local, fresh ingredients, and presenting them within the realms of my own style, was the most enjoyable part of the contest.”